Well, the first weekend in March, my husband and I went on to marriage retreat.  I cannot describe to you what a blessing it was.  There was one couple there that has been married for 63 years.  And they were still holding hands.  Now that is the picture of love that I like to see.

We had a wonderful group and loads fellowship.  Of the 5 couples that attended in our group, four couples stayed in the same hotel.  We would gather after the evening session in the lobby and play games and have snacks and fellowship.  It was great to get to know some of the couples from our new church family better.  We had such a great time together.

While I was there I was able to get some work done on the quilt I have started for my sister's baby boy.  She is due in May, but we are having a baby shower for her at the end of March, and I really want to get it finished before her shower.  I am making a paper pieced quilt of my own design.  I am going with horses because she loves horses.  I have 2 of the blocks mostly finished now.  I had the fabric sewn for the block but I still needed to do some hand work on each block that I had finished sewing.  For the corners I decided to go with the four seasons.  So I have mostly finished the winter and spring blocks.  I still have to add the mane and tail to each horse, but I got the flowers on the spring block and the snowflakes on the winter block.


﻿
So after we got home I started working on the summer block.  You know how they say that even the best laid plans go astray, well, somehow I put three of the sections of the block together backwards!  Yes, I said backwards!  Oh, well, they also say live and learn.  All things considered, with having three kids underfoot it has gone together remarkably smoothly. 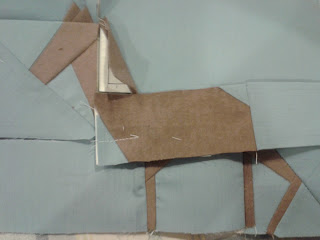 So I am going to re-draw the pieces for the section with the legs.  There wouldn't be anything left of the paper pattern if I tried to take the stitches out and sew it on the other side.  That is one downside of sewing though the paper, another is that you have to redraw the pattern pieces.  Oh well, again, live and learn.

I am still trying to decide what to do in between the horse blocks.  I had drawn up a pattern, but the more I thing about it the more I don't want to use that pattern.  Which kind of stinks because I  drew out 4 copies (which of course took three tries to get the measurements right.)  At the moment I an contemplating a simple log cabin design.  They are quick and easy to put together and are after all classics.  The complication is deciding what layout I want to use because my other blocks are 16 inches square.  I think I am going to go with a log cabin design with 8 inch blocks, but then again give me a few days and that may change again.  ;)  Anyway, I plan to finish the horse blocks this weekend, along with making royal icing flowers for my nieces birthday cupcakes, oh, and I have to go feed and water chicken and feed cows too.  Nothing like a full schedule to prove how productive you can  really be.

Hang in there folks, it's gong to be a crazy ride for the next couple of weeks!

Posted by creative chaos at 4:22 AM