So we had a missions conference this last week and I signed up to bring soup for Sunday lunch.  My husband requested that I make my own version of Olive Garden's Chicken & Gnocchi.   Just for those of you who love useless knowledge(like me) the pronunciation is nyo- ki.  Well, I didn't  have any gnocchi in the house so I went to the store.  It was on the late side so I had decided not to try more than just Walmart.  Of course, they didn't have any.  So I decided to make my own.  It isn't hard.  It just takes time.

﻿﻿﻿﻿
First step was double checking my memory for the ingredients.  It has been quite a few years since I made them.  So I got online and found a recipe.  Next I baked some potatoes in the microwave and finished them in the oven.  The directions said to break the skin and leave them in the oven with the door slightly open for 10 more minutes to dry out some.  I didn't give them quite that much time, but the oven was also on so that I could bake something else.  Then I took the potatoes out of the oven and scraped the insides into a big bowl.  The recipe called for the potatoes to be put through a ricer.  I don't have a ricer, so I just mashed them well.  Then I added the remaining ingredients.  As a note either I should have added more flour or I overcooked them.

﻿﻿﻿﻿﻿﻿﻿
I added the first cup of flour and mixed it in the bowl with the potato masher.  The rest of the flour I kneaded in on top of a pastry mat.  When I had worked all of the flour in, I divided the dough into five lumps of the same basic size.  These I worked one at a time.  I rolled each lump into a log approximately 1/2" in diameter.  These were then cut into 1/2" pieces.  The direction said to roll each of the 1/2" pieces over the back of a fork.  I found that for me it worked better to roll the pieces off the palm of my hand with the fork.  This adds a nice bit of line detail to the gnocchi.  It also assists in even cooking.  After I had all of the gnocchi made I set it aside until I was ready to add them to the soup.   ﻿﻿﻿﻿
﻿﻿
﻿
Once the gnocchi was made I could go on to the main part of the soup.  I started by cutting up a small onion very finely. I started it cooking in a frying pan along with the celery I had chopped up in my freezer.  I then cut up 2 chicken breasts into 1/2" cubes and added them into frying pan.  To this I added about  half a cup of water to keep the chicken from sticking to the pan. 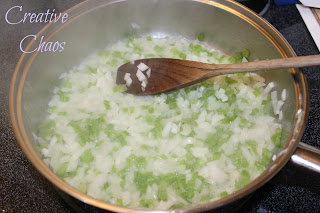 After I got the chicken all cooked I put the chicken mixture in the crock pot with about half a can of carrots that I cubed.  After the pan was empty I added about 3 cups of water to the pan and added a handful (one at a time - they were a little sticky after sitting for a while) of gnocchi at a time.  I cooked them for about a minute and a half for each handful.  I cooked about 4 small handfuls total.  Each handful was added to the crock of my crock pot as it finished cooking. 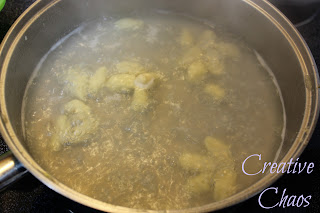 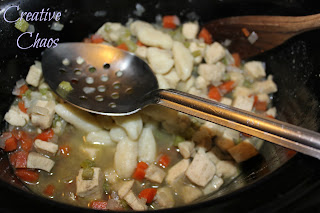 After I got all of the gnocchi cooked, I added the cooking water to the crock pot.  Then I pulled out a box of frozen leaf spinach.  This I partially thawed and then squeezed out as much of the juice as I could.  (If you don't do this the soup will be green.)  I also chopped the spinach up a little  bit.  After this I put the crock in the fridge overnight.  In the morning I took out the soup and we took it to church.  Once there I put the crock pot on high and it heated for about 2 hours.  Right before serving I added about 12 ounces of heavy whipping cream.  I added this so late so that the milk wouldn't curdle with boiling in the crock pot.

The biggest thing that I would change is not cooking the gnocchi ahead of time, but just cook it when I started cooking it in the morning.  I think that this would prevent the gnocchi from getting so soft.  It should have a firmer texture. 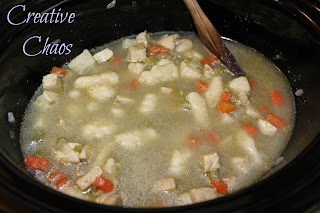 Apparently the soup was very well liked, because I didn't have any leftovers.  It is always nice for a cook to know that her efforts are appreciated.  As you can see from the pictures my three quart crock pot was filled to about 1 inch from the top.

So thank you to all of you who enjoyed the soup I made.  There is a great sense of fulfilment that comes from feeding others and having your food enjoyed. 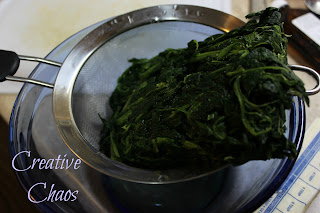 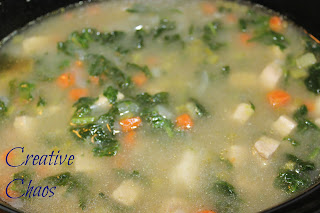 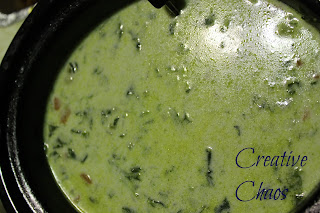 Posted by creative chaos at 2:23 AM

Email ThisBlogThis!Share to TwitterShare to FacebookShare to Pinterest
Labels: Food