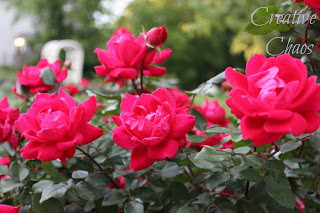 I love to make jelly that is not standard fare.  So I decided since I have a wedding shower coming up I would make some new jelly for the bride and groom. So I started with these beautiful bright pink roses from my mom's bush.


I started by picking two gallon Ziploc bags of rose petals.  It was almost dark so I didn't stop to strip the bottom end of the petals.  The directions that I had said to clip the bottom white part of the petals, because they would be bitter.  I simply pulled off the petals and bagged them filling the bags as full as possible.

I took them home and the next night I spent about four hours clipping off the white part of the petals.  After I completed this task, I boiled about a quart and a half of water to steep the rose petals. Next time I will take the time to clip off the ends as I harvest the rose petals.  I washed the rose petals in a full sink of water fishing them out by hand after swishing them around in the water for a few seconds.

I put the petals in a good size bowl, and poured the water over the petals.  They immediately changed from very bright pink to a very faded pinkish purple.  After I got the petals on to steep I went to bed.  The next day, I strained the liquid and petals through my own jelly cloth.  I squeezed every bit of liquid I could out of the petals before discarding them.

I took the liquid and poured it into a large heavy pot.  Unfortunately, for everybody, I am an old fashioned cook and I don't measure as much as I probably should.  As a result I am not sure how much sugar I put into this batch.  I only added sugar to taste, and I don't like jelly that is overly sweet.  I do know that I added 3/4 cup of powdered pectin and about 2 TBS of lime juice.  I like lime juice because I found that it is not as sharp.  Also so you get and idea of amount, my pot is a five quart. and it almost boiled over.  It really was a big batch of jelly.

I then cooked the jelly until I could put a spoonful of jelly on a plate to the side and have it jell as it cooled.  At the same time, I was sterilizing my jars in another pot.  As soon as I was happy with the level of jelling, I started to fill my jars.  I would fill one, wipe the rim, boil the lid, tighten the ring, and flip the jar upside down on the counter.

When I was all finished, I had 4 half cups, six half pints and half of a pint jar.  When I tasted the finished jelly I was thrilled with the flavor.  It was sweet and floral without being overwhelming.

All in all, it was a wonderful experiment that I will definitely be repeating this year.  Everyone that has tried it so far has liked it.

Ok, so my nieces wanted something to do today while they were with me.  I told them that if they would pick me roses I would make jelly for them to take home with them.  So my oldest niece brought in about a gallon bag worth maybe more.  She just cut the flowers off the bush like I told her and I trimmed them as I separated them,  This difference is huge!  The time required for this step was about a quarter of what I originally spent.

This is totally worth the time and effort if you like to give homemade gifts or just really like jelly.  It would go perfectly with  tea and toast, or scones.

Posted by creative chaos at 2:17 AM

Email ThisBlogThis!Share to TwitterShare to FacebookShare to Pinterest
Labels: All Natural, Food, Jelly