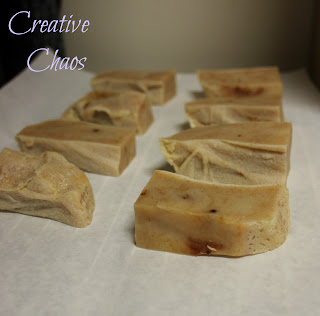 So I am ready to make a new batch of soap.  My first batch of cold process (after this referred to as CP) is cured enough to use, although it is still fairly soft.  However this recipe didn't rate very highly for hardness according to SoapCalc.com.


This soap will also be naturally anti-bacterial and anti-fungal due to my using colloidal silver as my liquid for this recipe.  However because I am not sure how the silver will effect the process this will be a small batch.  I don't think that it will cause any issues however.  This won't make the soap more expensive to make because I make my own colloidal silver (post coming in the near future.)  It isn't expensive to make so it won't really effect the price of making the soap.

I started by steeping dandelion flowers in olive oil overnight.   Dandelion is should to be soothing to damaged skin due to it's anti-inflammatory properties.  It also prohibits the growth of candida albicans  After about 20 hours, I drained the oil off and tossed the flowers.  I then used the olive oil in the soap along with organic shortening with palm oil, coconut oil, beeswax, and castor oil.  I also used colloidal silver instead of water to mix with the lye.  I did not see any adverse effects from the colloidal silver either in trace or up to and thru cutting the soap.

After I got to medium trace, I added one ounce of vitamin E oil and mixed for another 30 seconds in order to fully incorporate the vitamin E.  I added about a quarter of an ounce of sweet orange essential oil and about a quarter teaspoon of paprika and stirred to combine.  At this point I scraped the entire batch into my prepared mold. (a freezer paper lined ice cream bucket)  I let the mold rest on the counter for about 20 minutes to firm up a little bit and then added swirls to the top with my spoon.

After I finished swirling the soap, I turned the oven to 170* and placed the mold on the center rack.  The tutorials that I had read recommended leaving the soap in the oven for one hour.  In the mean time I folded laundry, after all what mother of three doesn't have mountains of laundry to fold.  As a result of the laundry folding, my soap got left in the oven for about two hours.  When I pulled it out, the soap had a really fun texture on the top.


I had to let the soap sit overnight before attempting to cut it.  It was still fairly soft the next evening when I pulled it out of the mold to cut.  As referenced in my Soap Suds post, I tried a wire this time for cutting.  I pulled out some of my 28 gauge copper jewelry wire and wrapped it around posts so that I would not cut my fingers with the wire when I was cutting.  Next time I will go with a heavier wire so that it isn't so hard to work with when cutting.   After I got the soap cut I was pretty pleased with the results.  The soap was still pretty soft when I cut it, but it wasn't soft enough to change the shape of the bars as I cut them.  It did influence the straightness of the cuts however.

Posted by creative chaos at 3:13 AM