So after having the coop built for a year now we have discovered some improvements that need to be made.  So when we went to do our spring cleaning this year we decided to get some of them taken care of while we had a chance.

Mind you we have 2 hens setting right now, so we are having to deal with that also.  One hen is setting on 8 eggs, the other is setting on 4 - 5.   They switch nests every so often and we keep having to remove freshly laid eggs out of the nest boxes.  Of course, they also choose to set in the two favorite nest boxes, even though there are six nest boxes.

List of upgrades:
1. linoleum inside the nest boxes
2. chicken wire instead of 1/2" hardware cloth under the roosts
3. multi-level roosts offset to avoid pooping issues not on diagonal posts
4. fold down flap at the bottom outside edge of the nest boxes
5. Installed storage for feed inside the coop
6. Nest boxes for setting installed inside the coop - no exterior access


To start with we are going to scrape out all of the old litter and compost.  After that we will be power-washing to coop so we can start with a clean slate.  We got the power washer started finally after some phone help from my hubby.  It was definitely a messy process.  In the process, I sprayed the top of my foot with the sprayer.  NEVER spray anything living with a power washer!!!!  It hurts!  I had taken off my crocs since the inside was clean enough that I was afraid I would track in more dirt with them on my feet.  Since my feet were bare the top of my foot was very vulnerable to spraying.  I finally got it all clean.


Now on to improvements.  Since we have two hens setting, we will have to wait about another week before doing anything to the nest boxes.  We took out the roosts that we had installed in the coop.  After that we cut out the wire underneath.  While we were working on the inside of the coop, my sister looked at me and made a wonderful suggestion.  The suggestion being that we leave the wire out and put wire around the base of the coop.  This would allow the chickens to use the area under the coop when the weather is bad.  So we fenced up underneath the coop and left it open for the chickens.  We discovered a problem this afternoon.  One of the chickens had laid an egg underneath the coop.  We had left one place that could be opened up, but we had closed it with zip-ties and didn't feel like cutting them.  So we got underneath to retrieve the egg and started working on a removable frame that we are putting chicken wire over.  We will be able to use the area underneath during the winter.   Then it will be cold enough that the chickens won't lay eggs underneath.

We built the frame for the area under the roosts, but in trying it out we discovered that we needed to take off a quarter inch. After we made this minor adjustment, which included replacing one of the end boards due to cracking, the frame fit just right.  This frame is covered as tightly as possible with chicken wire. The frame is held in by a board that is also removable and fitted into a space in between nails.  This will make it much easier to clean out the coop next time.  This arrangement should work well for us.

Since I had taken out the roosts, I had to do something else for the chickens.  I started by screwing a post to the studs across from each other.  Then I had to make supports for the other roosts.  I took 2x4's and attached them in pairs on the sides of the coop and screwed them in firmly.  After that I attached the roost piece to the top of the 2x4s.  I still have one more level of roost to install after I find an appropriate piece of wood.

The next step was building a shelf about 14" wide about four feet off the floor.  This shelf starts right at the edge of roosts and goes to right over the door from the coop into the greenhouse.  This should give the chickens more space to use.  Since we have all of these new chicks coming into the coop, we are going to need the extra room. 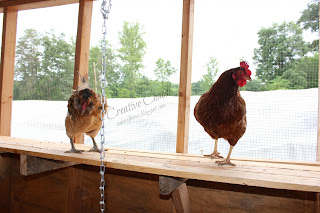 We also had to build a panel to go under the ramp into our greenhouse/run.  We tried putting plastic up this winter, but try as we might we couldn't get it to cooperate.  So we installed our panel and we will be able to staple the plastic to the panel this winter.

On a more fun note, we had our first egg hatch and it is an adorable fuzzy little ball of golden fluff. We had two chickens setting when I started writing this post.  As of this morning they both decided to go on strike.  So as a result, we have 2 hens that both think they should mother this poor little chick.  At least we won't have to worry about the rest of the flock picking on her.  As far as we can tell at this point it looks like it is a hen.  But you can never have too many pictures of cute babies.


List of upgrades:
1. linoleum inside the nest boxes  - Later
2. chicken wire instead of 1/2" hardware cloth under the roosts  - Check
3. multi-level roosts offset to avoid pooping issues not on diagonal posts  - In Progress
4. fold down flap at the bottom outside edge of the nest boxes - Check
5. Installed storage for feed inside the coop - In Progress
6. Nest boxes for setting installed inside the coop - no exterior access - Later

Posted by creative chaos at 9:55 AM