This skirt started out as a pair of pants that my daughter loved until they were holey.  Those who have known me for a while, will know that I hate to throw things out.  So I decided to make a skirt out of it.  I had been looking through my stash of fabric for a while trying to find the right material.  While I was in Hancock's one day I found the perfect fabric and I just couldn't let it go.  I fell in love with the plaid.  I found this cute pattern to go with it.

I started by laying the pants on a flat surface.  After getting them flat I cut them off right at the crotch.


The last row is plaid.  This means that the plaid needs to be matched.  After pinning all the way around the skirt, I sewed the row of ruffle to the skirt. After sewing the seam, I sewed the seam flat to the pants base.  The first layer is then complete.So I cut my material in two width wise pieces.  I them matched my plaid and pinned it all of the way down.  After pinning I trimmed the part that was over the edges on either side.  After sewing the side seams, I pinned and sewed the hem in.  This is easier because there is less material to handle.  After sewing the hem, I sewed the 2 rows of basting stitches to make it easier to gather.  The next step was to pull the stitches on one side of the fabric.  This makes it much easier to make a nice gather.  After that I just had to pin and sew the layer to the one before.  I got everything pinned, trying to get all of the gathers fairly evenly dispersed.  I got everything even and sewed the last layer on.  After I got everything finished I realize I may have made it too long, but it turned out just right.  B loves it! 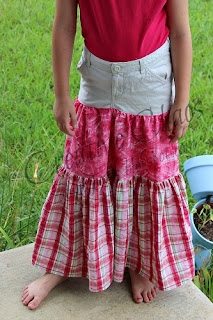 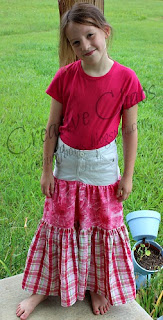 Posted by creative chaos at 2:43 AM