I found a silicone gingerbread man pan on clearance this summer and my first thought was that it would make an awesome Christmas time soap.  So I started by making a small batch of soap a few weeks ago.  I poured the batter into the mold and tried to get it to gel on its own.  It didn't work because the size of the figures was so small, so I put the entire pan in the oven for 30 minutes at 170*.  This did the trick.  After putting the mold in the freezer for about an hour before un-molding.  The freezing helped make them firm enough to pop out of the mold without breaking.

As you can see from the picture here the gingerbread men started out fairly pale.  After a couple of days the little figures darkened up quite a bit as you can see.  I did trim the back surface to make it look better.  These were set aside while I made the recipe for the base soap.


I decided to use the red clay that I had on hand for the red swirl and I used some titanium dioxide to whiten the rest of the batch.  After measuring and mixing the oils and mixing the lye water, I let the lye water cool.  I had used about 2/3 of the water amount in ice which speed up the cool down.   I also didn't heat the oils  a whole lot.  As you can see it blended up nicely.  After getting trace, I split the batch in two parts.  I added about 2 teaspoons of  titanium dioxide to one half and about 1 teaspoon of the red clay to the other half.   I used an in the pot swirl for this batch.


After I got the mold filled to my satisfaction I started working on my sample mold.  I added my cut pieces of the gingerbread man soap to the remaining soap.  I very gently pushed the pieces into the batter being careful not to mix any more than absolutely necessary.  I didn't want to mix my swirl until it was not a swirl any more.

After I gave the soap some time to thicken up I pressed the gingerbread men down into the soap mixture.   I placed everything in two rows so that I would not have any trouble cutting the slices into two bars each.  I also had to leave a little space in between each embed so that I could slice the log.

After getting everything molded the soap didn't look like it was going to gel on it's own.  I have a rice pack that can be heated in the microwave.  I heated it for 2 minutes before laying it out on top of my towel and placing all of my molds on top of it.  Then I placed a rubbermaid container over the top of the whole thing.  Then I wrapped the whole thing in a large bath towel.  I did reheat the rice pack once because it didn't look like gel was complete. 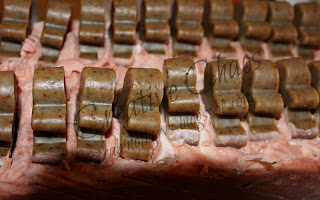 I started by cutting the loaf length wise.  This left me with two logs.  I scrapped the middle of the two logs where I had cut it to clean up the edges.  I also sliced a thin layer off of the outside sides.  After getting everything neatened up I started slicing the logs with a paring knife.

My house smells like a bakery right now.  I also now have a rack full of soap curing.  It is a very satisfying feeling.