I have wanted to make some salt bars for a while now.  I had the recipe all figured and everything.  Well I finally made them.

I started by measuring out my liquid, I used half ice and water in separate containers.   I measured out my lye, then I added the lye to the ice.  I poured the water into the container that had held the lye and swirled it to make sure that I had all of the lye before pouring it in with the rest of the lye.  This ensures that I don't end up with a higher super-fat percentage than was planned.

Next I started measuring out my oils.  I used 80% coconut oil along with Sunflower, Rice Bran and castor oils.  Because coconut oil can be drying I used a 20% superfat.  Normally I don't use more than 30% coconut oil in any of my recipes, but the salt negatively effects lather so the extra coconut oil compensates for it.  I also added 2 Tbs of pink grapefruit essential oils as this point.  Note I did not melt the coconut oil at all.

I added the lye to the oils and started to blend it.  The color wasn't great at this point, but I wasn't finished.  I blended until all of the oils were emulsified.  At this point I added about 1/2 tsp of madder root powder directly to the soap and blended until there weren't any more lumps.  By this point I was at a light trace.

It was time to add the salt.  So I measured out 40 ounces of sea salt ( equal to the amount of oils). 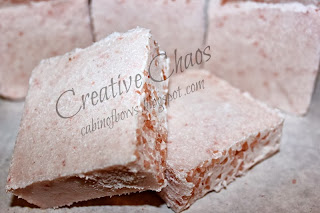 I added the salt in three parts to help minimize lumps of salt in the final product.  Unfortunately I forgot to make sure the salt was free of lumps before I started adding it.  As a result I had to do a little mashing after the soap was in the mold.  It worked but it would have been easier if I had crushed the lumps before adding the salt to the soap.  After I got the soap all in the mold I sprinkled the top with some Himalayan pink salt.  Since the soap is lightly pink due to the madder root the pink salt makes the finished soap look that much better.  I did not force gel on this soap and it didn't heat up like the last several batches have.  Since it wasn't hardening up like it was supposed to, I put it in the oven for about 20 minutes.  This did not make it gel but it did cause it to stiffen up a bit more.

I finally decided that it wouldn't work to cut it the next morning and started cutting.   It definitely got interesting.  I have several small shallow cuts on my hands so handling this soap was a little challenging.  I kept having to wash my hands to get all of the soap off.  I finally got all of the soap cut.  I decided to wait before putting the soap on the curing rack.  I didn't want to have groves in my finished bars, and the bars were still soft enough for the rack to deform the bars.

Just washing my hands with this soap left them feeling amazing!  I think one will be a keeper.