I had two brother's having a birthday party last weekend and I couldn't think of anything better than a homemade gift.  So since I am in soap mode, soap it is.  J really likes mint so I made him peppermint soap.  I gave P his choice and he chose the Earl Grey.

My folks had one of their steers butchered this last week, definitely an experience.   Their butcher saved me all of the tallow.  So the next day, I went to their house again and rendered the tallow the old fashioned way, over an open fire.   I had some adjusting to do.  We started off with the fire underneath and had to move it to the side very quickly.  The fire was way too hot.  Even moving it to the side wasn't enough. We had to add a second set of cinder blocks to keep the pan high enough off of the flames.  I strained everything through a sieve, but it needed more straining.  I pulled out my soap crockpot, and yes I do mean out as in outside.  Lets just say that tallow that is not filtered is not an appealing smell.  I put a couple of inches of water in the bottom.  The sieve went onto the top of the crockpot with a coffee filter inside which I then filled with tallow.  The hot water keeps the tallow hot  enough to filter through the coffee filter.  As the crockpot fills up I dipped the hot, liquid tallow into another pot.  As soon as I get through all of the tallow I will be storing it in a 3 gallon (formerly icing) bucket in the refrigerator in our shed.  It is definitely not something I am in a hurry to do again, but it was a valuable experience. 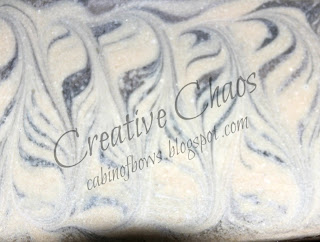 I always measure the lye in grams to make it precise as possible.  As always if you want to use this recipe (feel free) please check it with a lye calculator like this one.  http://www.soapcalc.net/calc/soapcalcWP.asp  Measure everything out first, then add lye to the water (NEVER add the water to the lye).  After the lye has cooled to about 100* you can add it tho your melted oil mixture.

To the peppermint soap I added 1 TBS of peppermint essential oil.  The peppermint soap is colored with about 1 ounce of comfrey infused oil.  I should have used more comfrey oil.  I was hoping for a nice green, but I only got a greenish yellow.  I used a spoon to give the top of the soap a nice texture.


For the earl grey, I measured out 9 ounces of water and boiled 3 tea bags in it for a few minutes.  After cooling the tea and remeasuring the liquid due to volume lost during boiling I used the tea to make my lye water.  Be warned at first this will smell pretty awful, but the smell gets much better after a few days.  After a week or two the soap will smell delightful.  I did not add any other scents to the earl grey.  I did add a little titanium dioxide and activated charcoal to about 1/3 each.  Then I used squirt bottles to layer very thin layers ending with the titanium dioxide soap.  After I finished layering I swirled the soap with a skewer in a figure eight pattern.